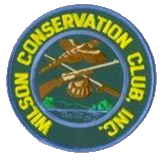 This newly elected Board of Directors then appointed Lincoln Smith as President of the new club and Walter Ganshaw as acting Secretary and Treasurer.  Twenty-six people paid dues and became the first members of this newly formed conservation club this night.
The next meeting was held October 11, 1951, again at Tommy Brawn’s garage.  It was at this meeting that the second Thursday of each month was decided on to be the regular club meeting night.

In July of 1952, the Wilson Conservation Club started looking at a parcel of land on Ide Road to be purchased for the club.  It was identified as Town No. 15, Range No. 7, Section No. 60 and comprised  22.5 acres.  It had 320 fet of frontage, a well, and a foundation on site.  It could be purchased form Steve Carveth for one thousand dollars.  This land was located just east of Walter Schnoors property.  Clifford Upton, trying to gauge the sale of this land to the Wilson Club, took a “statement of consent form” around to neighbors of this property and received a favorable response and signatures from Allen Rohring, Stanley Goodman, Harry Munenster and Walter Schnoor.  In July of 1953, Mrs. Carveth informed the club that this parcel of land was no longer for sale.

In October of 1953, Tommy Brawn informed the club that through him, Pete Toennisson had offered for purchase, approximately 34 acres of land with frontage on Wilson Town Line Road for one thousand dollars.  This also included a 140′ x 40′ cinder block building.  In addition to this property, another 12 acres of land immediately west and adjacent to the Toennisson property owned by Adam Ball, was offered for sale for three hundred dollars.  By December of 1953 the deal was done and the 46 acres was now the property of the Wilson Conservation Club.  Total price: $1,300.00.

There was no pond on the property as purchased.
April thru May of 1954, the cinder block building bought with the property was torn down and used for fill for the parking lot.

The first club picnic was held in July of 1953.

It was decided in August of 1953 to have a raffle to raise money for the club.  The prize being raffled off was to be a shotgun or a ton and a half of coal.  The raffle was to be held in October.  Five hundred tickets were printed up and sold.  The raffle was won by George Frueger of Randall Road.  This gentleman did not want the shotgun or the coal so he was given thirty five dollars instead.  The President, Lincoln Smith, appointed Pepper Martin and Ralph Piggins to be in charge of this raffle.